There are important concerns that face the members of the lighting industry and many are associated with the legislation that happens in Washington DC.

I had the privilege of accompanying the American Lighting Association to Washington DC in May as a member of the Board of Governors and the Chairperson of the ALA Political Action Committee.  I have difficulty expressing the honor and joy I felt doing this, helping our industry. 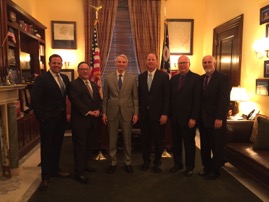 The collective mission of our group was to lobby key Congressman and Senators explaining the impactful issues that the residential lighting industry faces. We have met with some of the Senators and Congressmen before, and for a few of us, it was for the first time.

The key issues we discussed were:

Depending on how the conversations flowed we also raised topics like health care, the two major parties working together and so much more.  These politicians could not be more gracious with their time and attention.

Our group also met with a variety of influential people from important departments in government.  One of the DC influencers present was Energy Star, and they gave a presentation about the evolution of their program.

We also were given a presentation by the Appliance Standards Awareness Board, and they explained what they do.  I want to thank the American Lighting Association, Eric Jacobson (President/SEO), Larry Lauck Executive Vice President), Terry McGowan, (Director of Engineering for ALA) and Michael Weems (Vice President) for the excellent coordination of the meetings and events. .

I also want to thank Lutron Electronics for hosting us at the Lutron Experience Center for lunch.

Lastly, my counterparts from the lighting industry who spent their time and money to come to Washington DC to make a difference:

I want to applaud the commitment of this outstanding group of people and those like them, seeking to improve our industry for everyone that is in it.